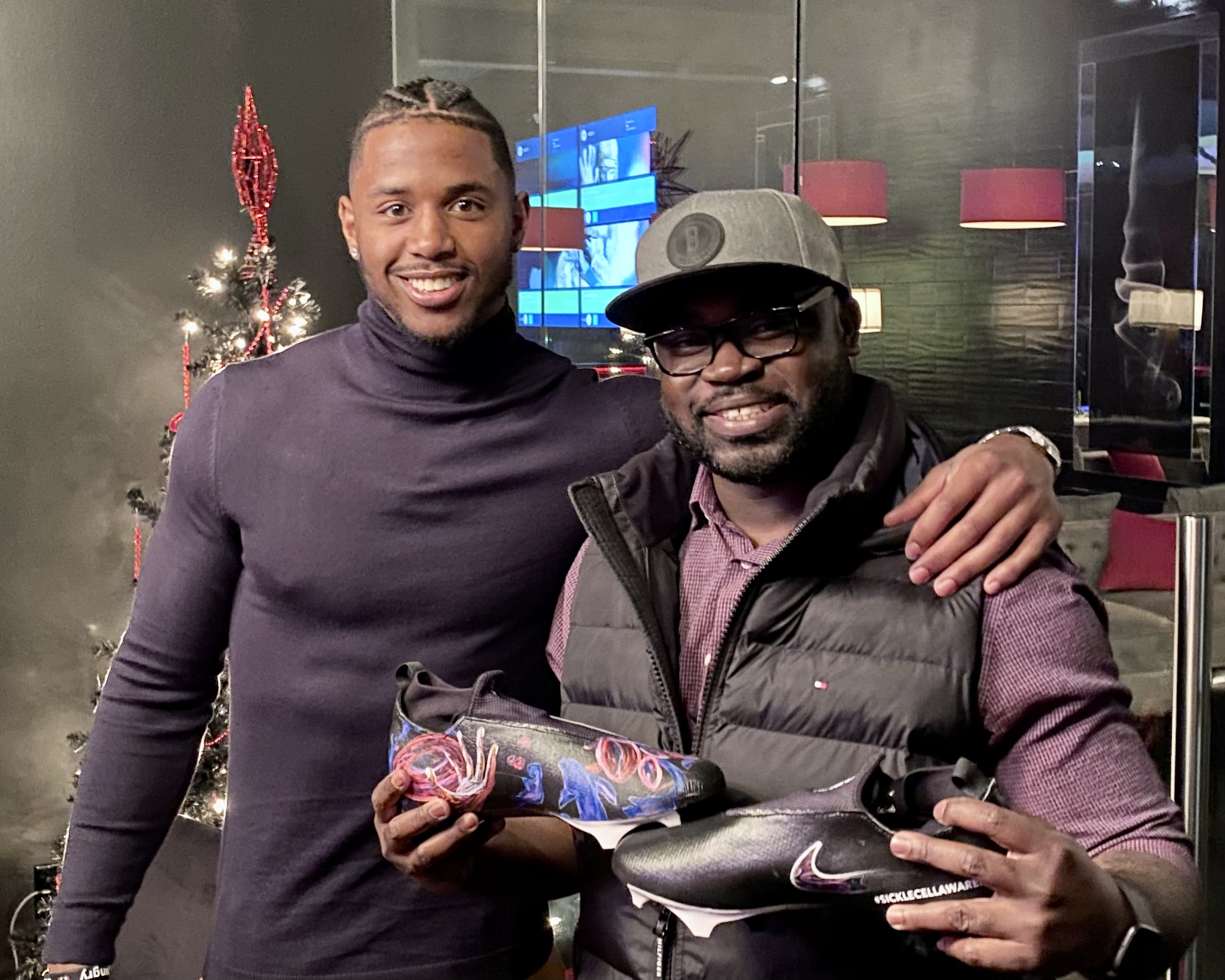 For Donovan Peoples-Jones (DPJ), he is no stranger to making an impact on the football field. The Cleveland Browns star wideout recorded made several impact plays to help secure an important divisional win over the Baltimore Ravens on December 12, 2021. In this game where his spectacular sideline catch won him the famous “Toe Drag Swag” award by Nate Burleson of the NFL Network Good Morning Football show, it was also the message on his cleats that day that has inspired so many.

During week 13 and 14 of every season, NFL players hit the field in custom cleats that represent causes and organizations that are important to them as part of the league’s My Cause My Cleats campaign. For the second year in a row, DPJ chose Sickle Cell 101 as his charity of choice for this campaign to help raise awareness, education and research for sickle cell. In the game, DPJ rocked a pair of cleats with the logo of Sickle Cell 101, a 501(c)(3) non profit organization that is well known for its work and impact in the global sickle cell community. Sickle Cell 101 is the largest global online platform dedicated to education, research and awareness for sickle cell disease and sickle cell trait. To date the organization has reached and impacted over 50,000 followers on social media platforms in over 110 countries. Sickle Cell 101 is led by a diverse team of patients, caregivers, healthcare providers and researchers who have all been impacted by this disease in various ways. In this ongoing campaign between Donovan Peoples-Jones and Sickle Cell 101, both partners share pertinent educational content on sickle cell disease and sickle cell trait to help raise awareness to the general public. Sickle cell is a genetic blood disorder that affects red blood cells ability to transport oxygen to tissues and organs and can cause a myriad of complications like pain, infection, strokes, anemia, among many others. Although sickle cell can affect any individual irrespective of race or ethnicity, it disproportionately affects the black community which often is associated with poor healthcare access and outcomes for these patients. Sickle cell was also the first known molecular disorder discovered, yet there are only 4 drugs currently approved to manage it compared to other similar disorders which have more treatments and curative options. 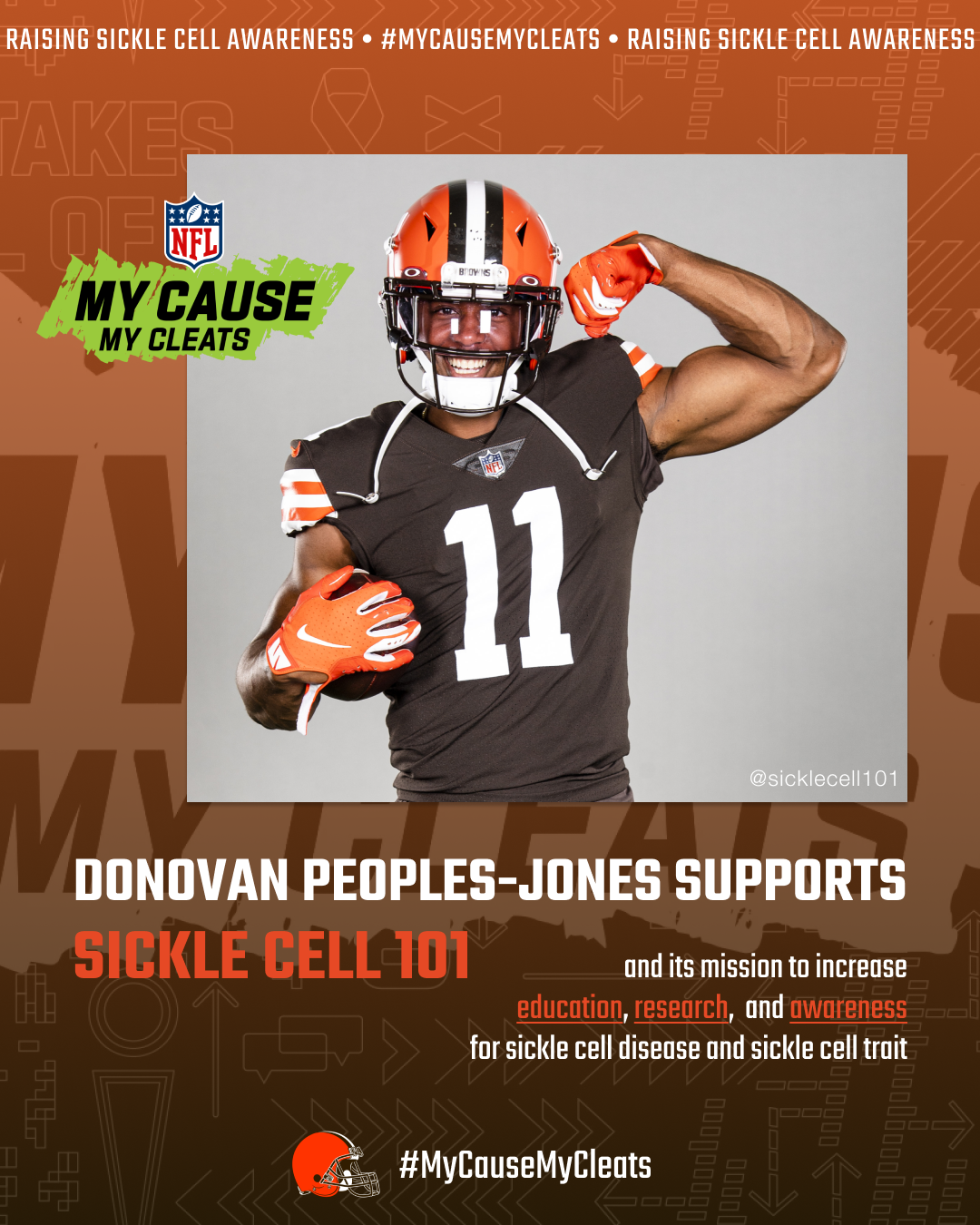 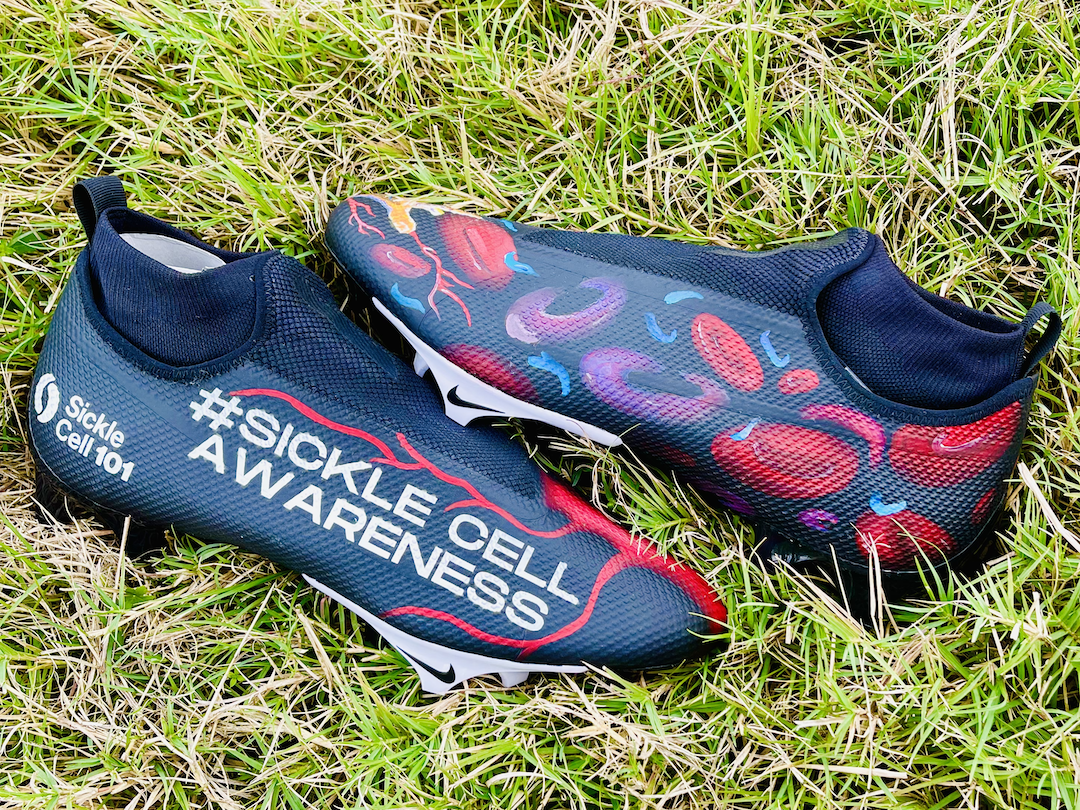 This partnership between DPJ and Sickle Cell 101 aims to improve healthcare experiences for patients while also advocating for more funding in research to increase treatment and curative options for sickle cell disease. The partnership also provides pertinent education and awareness on sickle cell trait (when a person has only one copy of the sickle cell gene), especially with evolving research confirming that for some with sickle cell trait potential complications can occur under certain extreme conditions.

For so many patients, caregivers and advocates in the sickle cell community, seeing DPJ in the NFL wearing a pair of cleats to advocate for sickle cell through #MyCauseMyCleats and also raising awareness with his platform is a very important milestone as sickle cell has been an underserved and neglected community despite its tremendous impact on so many families.

The campaign also included several customized cleats by Sickle Cell 101 for DPJ with one design highlighting the artwork of Hertz Nazaire, one of the most prominent advocates and artists in the sickle cell community who unfortunately recently passed away. Hertz’s artwork has been referenced by so many and was most recently featured on the front cover of “ Sickle Cell Disease” a textbook with the most comprehensive, current sickle cell disease resources for both clinicians and researchers written by over 80 dedicated experts in the field. 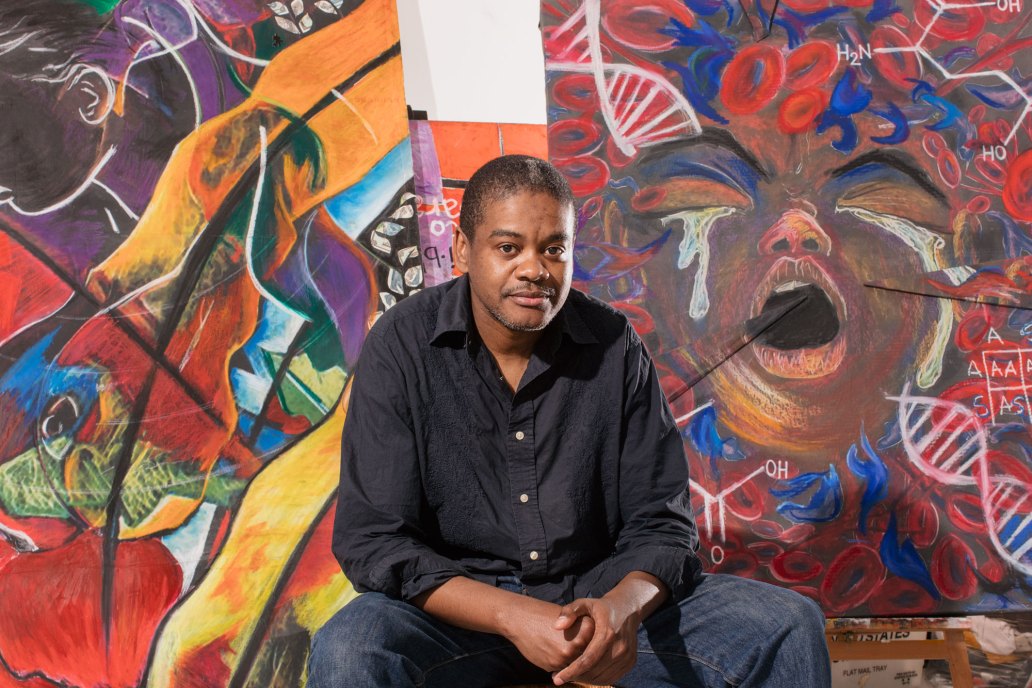 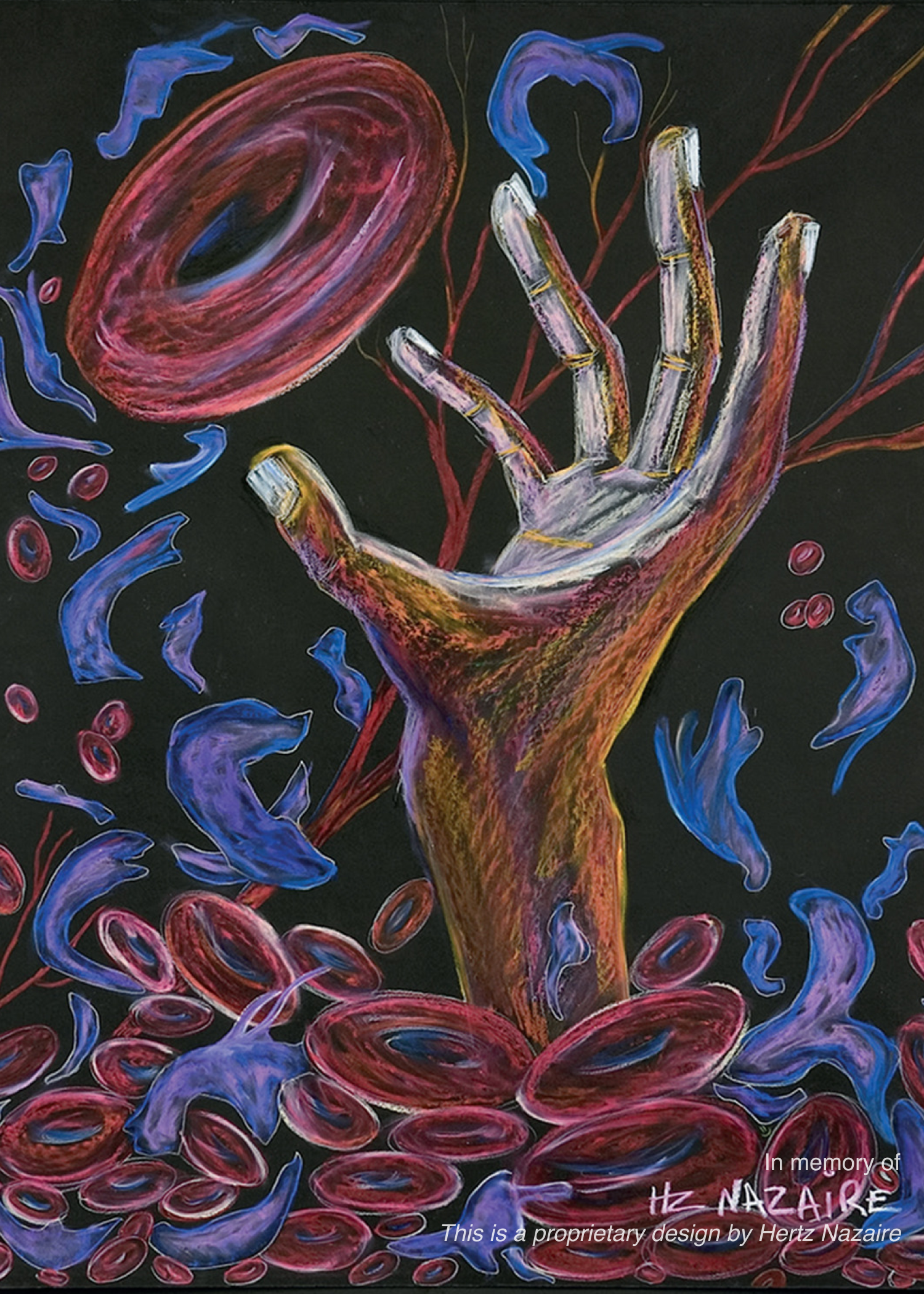 One sickle cell warrior recounts how DPJ’s advocacy for sickle cell gives her hope stating, “finally someone raising awareness for us warriors”. In a letter written and delivered by the Sickle Cell 101 team to DPJ at the game, founder and executive director of Sickle Cell 101, Cassandra Trimnell emphasized how important the work DPJ is doing for the sickle cell community. She writes “ultimately, the awareness you bring trickles down to better outcomes for us living with sickle cell disease. Our future is brighter with advocates like you standing alongside us.”

The cleats won by Donovan Peoples-Jones will be auctioned and all the proceeds will go directly into charity to improve education, research and awareness for both sickle cell disease and sickle cell trait. A big thank you to all the artists who helped design the various cleats for this campaign and to the Cleveland Browns for collaborating with Sickle Cell 101 for this campaign. Donovan Peoples-Jones is an impact player on and off the field and the global sickle cell community is grateful to have him be a voice for the voiceless.

Visit www.sc101.org to learn more about sickle cell disease and sickle cell trait and the ongoing partnership between Donovan Peoples-Jones and Sickle Cell 101.