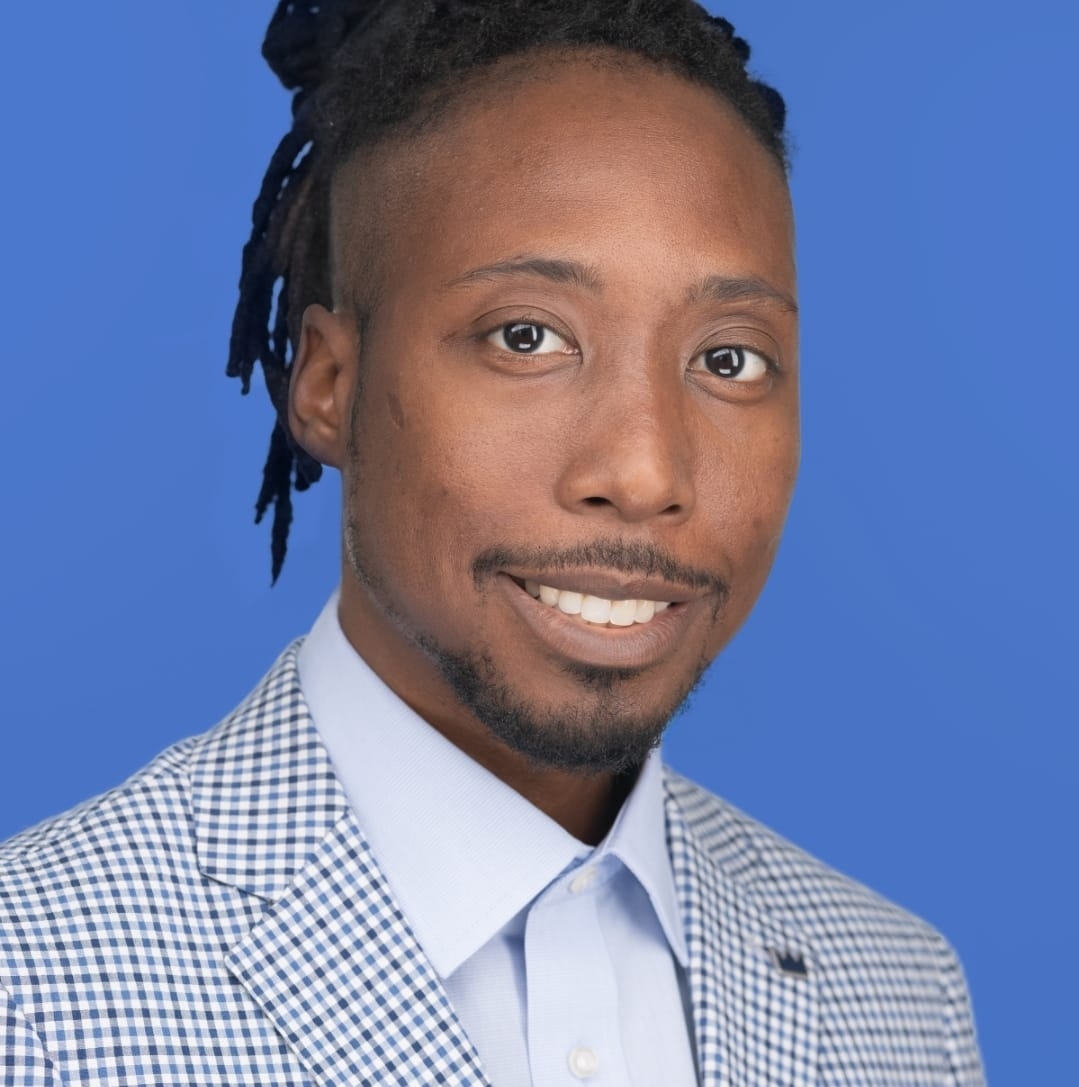 We had the wonderful opportunity to meet and speak with Mr. Clayton Andrews, a sickle cell warrior with the HbSS genotype, a sickle cell disease advocate, and a proud girl dad who is the father of three girls biologically and eight in total. Originally from Savannah, GA, he currently resides in Atlanta with his fiancée, where he also works in mental health. His work in mental health focuses on the effects of chronic illness on mental health, men’s health and mental health, and investigating the forensic element of mental health. Mr. Andrews is also the Chair and Co-founder of the Sickle Champions Men’s Action Network (SC M.A.N), which is a mentoring organization geared and designed for the guidance and empowerment of young males with Sickle Cell Disease into their transition into adulthood.

What influenced you to become an advocate in the sickle cell community?

I will probably have to give a majority of that credit to Dr. Lakiea Bailey. I’ve known Dr. Bailey for well over a decade. I met her through her younger sister as a matter of fact. When her sister and I met, I told her that I have sickle cell and she told me that her sister, who happened to be Dr. Bailey, also had sickle cell. Dr. Bailey and I eventually met, and it’s just gone from there. Around the end of 2015, I got a call one day from Dr. Bailey, who was telling me that her organization was trying to get some things together about advocacy, moving things forward, and really getting the word about sickle cell out there, especially for men. She called me and several other brothers with sickle cell disease and I guess the rest is history.

Who is Dr. Bailey? Can you tell us more about her?

Dr. Lakiea Bailey is the Executive Director of the Sickle Cell Community Consortium. She’s got tons of work under her belt. She is just a very brilliant, smart woman. She also has sickle cell and is a sickle cell advocate.

Can you describe your early experience with sickle cell disease?

Growing up, my early experience with sickle cell was simply knowing that I have sickle cell, which was kind of, in retrospect, a gift and a curse and I’ll tell you why. My mom protected me a lot when it came to sickle cell. All I knew was that I had sickle cell; I didn’t really know what that was. The only thing I knew what it meant was that I get into pain a lot and I get tired easily. She didn’t explain the complexity of the disease, a lot of the things that I was limited with, or ways that I would have been limited. And the reason I say that was kind of the gift and the curse is because you know for one, obviously she didn’t tell me everything, so I didn’t know what was going on. At the same time, it was a gift because it kept me from making excuses when I would try to accomplish things. I couldn’t use sickle cell as an excuse because all I knew was I get in pain and I get tired easily. So, for me, that was a normal, regular thing, and was never a justification to say why I couldn’t do something.

Would you say that there is a difference in how sickle cell disease may affect a man who is single vs. a man who is married and/or has a family?

I think the only difference would be the pressure. We’re all dealing with the same thing: we’re dealing with societal expectations, we’re dealing with our role as men – you know the definition of what a man is supposed to be, et cetera. I would have to say I think the only difference is the pressure. When you’re single, if you don’t have kids, you can deal with your disease as you need to deal with it. Whether you’re missing work, or missing school, it’s just you. When you have a family involved, it adds that pressure to where it’s like, no, I absolutely cannot miss school because I’ve got these responsibilities, which further and further impedes the process and further exacerbates the crisis or the dealings that are going on. So, it’s that pressure that fundamentally just really inhibits or excites that pain and that crisis more. Not only are you now dealing with the pain, but you’re also dealing with the stress that’s coming with the fact that I may have to miss work, or I may have to miss this event, or I may have to do this – that adds on to that stress.

In your experience, how have you had to deal with that pressure?

For me, I try to continue to push. I take the role of a man very seriously and I take those responsibilities and what’s expected of me as a provider very seriously, so when I’m unable to care for my family as I feel I need to or if I’m inhibited in some kind of way, that really bothers me a lot.

Has it had a mental or physical impact on you, in terms of the pressure you may experience?

Yes, it’s cyclical. When you go into a pain crisis, you try to manage until you can’t manage. When you can’t manage, you’re going into the hospital and you’re taking that time off, or you’re stuck in bed all day and you got all these other things going around, and it’s hard to explain to your fiancée, “I really don’t feel like going here or there right now. It’s not that I don’t want to; it’s just that I really just can’t. I’m tired, I’m exhausted.” It’s tough saying that all the time. So, it creates a bit of a toll.

How do you treat yourself at home? When does it get to the point where you know you have to go to the hospital?

I usually try to treat things holistically first without any medication. I really do not enjoy medicine, so if I feel like it’s my hemoglobin, my fiancée’s trying to shove beet juice down my throat. I guess it helps. Beets, leafy greens, those kinds of things help with blood flow. So, especially if I know that it’s my hemoglobin that’s just really low and I’m just not feeling good, that’s the first thing we’re going to. Pain wise, most of the time I’m able to just get through my day in any kind of pain. It’s one of those things that we’re just used to, and so I try to monitor my pain levels: is this the pain that I can go to work or is it a little bit higher? I’m just gauging the levels of pain. For me, in scaling pain from a 1 to a 10, most of the time I’m going to work unless it’s a six; if it’s a six, I might take a half day or I might call in. I’m not going to the hospital until it’s an unbearable 10. I’m trying to avoid it at all costs.

What would you want people to understand about men with sickle cell disease?

I think this is something that we all deal with – not just men, but I see it a lot with men more: we are not lazy. If we are telling you that we are tired, truly we are tired. If you met anybody that I know, they will tell you that I’m like a shark; I can’t keep still. I don’t like being stagnant. So, if I’m finally just sitting down and I’m just like, “I’m done,” I’m really done. I think that’s one of the biggest things.

I think the other one is men need mental health self-care as well. A lot of times, men are expected to be able to tough it out and man up. Even I have been guilty of trying to push and just man up, but I see a therapist myself, even as someone who works in mental health because it’s a way to keep the edge off. It is necessary to keep that mental health care.

What advice would you share with men with sickle cell disease that has worked for you, whether it’s physical care, food intake, or anything else?

Physically, definitely pace yourself. That’s one thing I’m always guilty of is not pacing myself and trying to go all-in, again because as a man I’m expected to, but being able to pace yourself helps. Watch what you eat, watch what you consume. My fiancée has been getting on me for the longest about my diet. I love my fried food. I go to Popeye’s at least three times a week. She’s absolutely right about eating healthy! I just got to change that behavior. Eat healthy, eat more veggies, especially the green leafy vegetables. I wouldn’t put beets on anybody – I can stand them but eat green vegetables and also liver. Liver is actually good for our diet. I encourage working out. Getting a good exercise workout regimen helps with blood flow and helps you stay healthy.

What does having sickle cell mean to you, generally speaking?

For me, it means nothing – nothing changes or has to dramatically be different. It means I get up, I put my clothes on one sleeve, one pant leg at a time. I go out there and I do the best I can with what I have. When the symptoms manifest, I deal with them as I need to and I just continue pushing, but that’s what it means for me. I know I can handle this pain and I know to what degrees I need to get help. I grew up being the oldest of five children. So naturally, as the oldest, I have to protect my siblings. I’m the only one with sickle cell. I have two siblings with the trait, and the youngest two are from a different marriage, so they don’t have it at all. My three daughters have the trait. So, for me, it’s always been that I’d rather it be me dealing with this than the people in my family that I love.